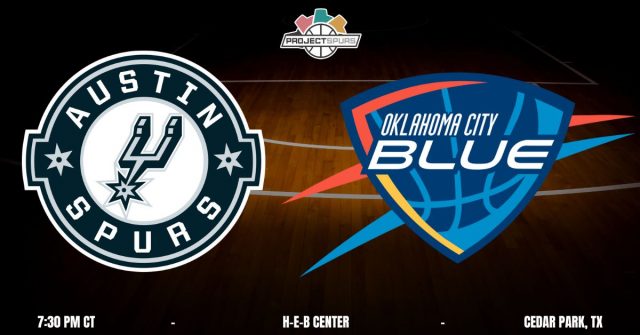 After a disappointing run in the annual NBA G-League Showcase Cup, The Austin Spurs will look to end 2022 strong as they return to the H-E-B Center against the Oklahoma City Blue. The OKC Thunder affiliate will prove to be a staunch test for Austin, as both teams will be ready to improve for next year. OKC has already played after the showcase cup, winning a tight 112-108 contest against the Sioux Falls Skyforce on December 27th. After a rough start to the season, Austin will look to bounce back and try to have a strong rest of the season.

Nothing better than kicking off the start of our Regular Season like anticipating a SOLD-OUT game!🤯⁰⁰Limited seats including court side are still available! Be here for our first Raros night, first 1000 fans get a breakfast taco air freshener! 🙌⁰⁰🎟: https://t.co/wopHzH1Kc7 pic.twitter.com/T6Vhg9FRPN

The Spurs are back from their Showcase Cup trip to Las Vegas in which they finished the tournament 0-2. This was a great experience for these players to play teams outside of the conference and get to participate in a unique event. Austin’s two losses were against the Delaware Blue Coats, which was a final score of 127-107, and the Wisconsin Herd by a close score of 114-112. While they weren’t able to pick up any victories during the Showcase Cup, it will have kept the squad fresh and sharp for this next stretch of the season.

Austin has gotten some recent additions to the team that are sure to be beneficial for the squad overall. Dominant center Charles Bassey ended up with 29 points and 11 rebounds in the loss to the Herd. However, he showed how big of an impact he has on this offense, along with a monster block on defense. Alize Johnson has also returned in a big way with 10 points and a staggering 19 rebounds in the loss. Rookie draft pick Blake Wesley has also joined Austin recently and finished with 13 points on the night.

There is NBA-caliber talent in this Spurs squad at this point of the season, and it will be interesting to see if this mix of talent can gel into a complete unit. If players like Bassey, Johnson, and Wesley can continue putting up great numbers alongside Chaundee Brown Jr., this Austin team can be a very scary opponent for many.

The Blue finished 1-1 during the Showcase Cup in Las Vegas this past week, with their return to league play ending in a victory vs. Sioux Falls. In a tight game, it was the Blue who had a couple of big performers on the night. By far the most impressive was center Jaylin Williams, who ended up with a triple-double consisting of 21 points, 14 rebounds, and 12 assists.

Williams is the player to watch for this team, as he has a physical nature to his game while also having a high basketball IQ. Guard Lindy Waters III also had 21 points to go with five rebounds and three assists. Despite players like Jahmi’us Ramsey not playing, these stats still show how deep and talented the Blue really is.

This is going to be another difficult challenge for Austin to handle in what looks like a competitive G-League group of teams this season.