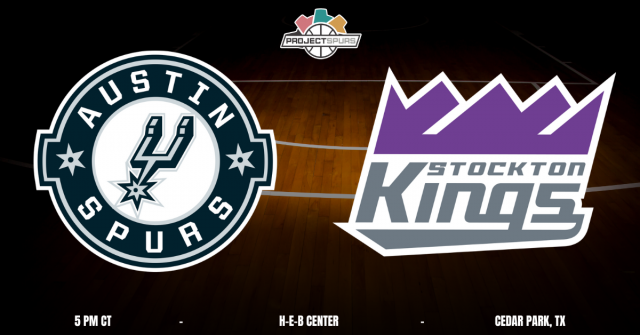 The Austin Spurs are back to winning ways after a big 108-105 win vs. the Oklahoma City Blue on December 29th. It has been a rough couple of weeks for the Spurs as they have found it hard to obtain a few wins during this stretch. However, a big win vs. the Blue may be the beginning of a turnaround at this part of the season. It will not be an easy test as they take on the Stockton Kings at the H-E-B Center in Cedar Park. Tip-off for the New Year’s Day clash will be at 5:00 P.M. CST.

The Spurs found themselves back in the win column after the tight 108-105 win vs. the Oklahoma City Blue on the 29th of December. The re-emergence of Alize Johnson has been a big-time boost to Austin on both offense and defense. Johnson was one of the top performers from the win with 18 points and 21 rebounds. Alize has such a physical presence on the court and can jump out of the gym with his athleticism. The forward has been up and down from San Antonio and Austin during his time with the Spurs but will have an immediate impact on the G-League team.

Big man Charles Bassey also had 15 points and nine rebounds to complement Johnson’s performance. The Western Kentucky alum has been Austin’s best performer this season and continues to dominate at the G-League level this season. With a strong frontcourt of Johnson, Bassey, and Chaundee Brown Jr., Austin has some serious offensive talent. Spurs fans should also keep an eye on the progression of rookie Blake Wesley, who dropped 21 points against the Blue and has been impressive so far this season.

The Stockton Kings had a nail-biting 113-112 win against the Santa Cruz Warriors on December 30th. The Sacramento Kings affiliate has a pretty big name on their roster in NBA veteran Trey Burke, who had 29 points off the bench in the win. Burke has always been known to have a scoring edge to his game, and can really cause problems at this level. Guard Chance Comanche had 18 points and a solid 14 rebounds while center Keon Ellis had 16 points and six rebounds. The Kings are a team that likes to attack the paint and drive to the basket and relies on second-chance points in order to get a big chunk of the production. However with a player like Burke in the mix, this team can score from other methods, and it will be a tough matchup defensively for Austin to face.

If the Spurs can contain the frontcourt and dominate the boards, they have a strong chance of making it two consecutive wins. What is your prediction for this game?