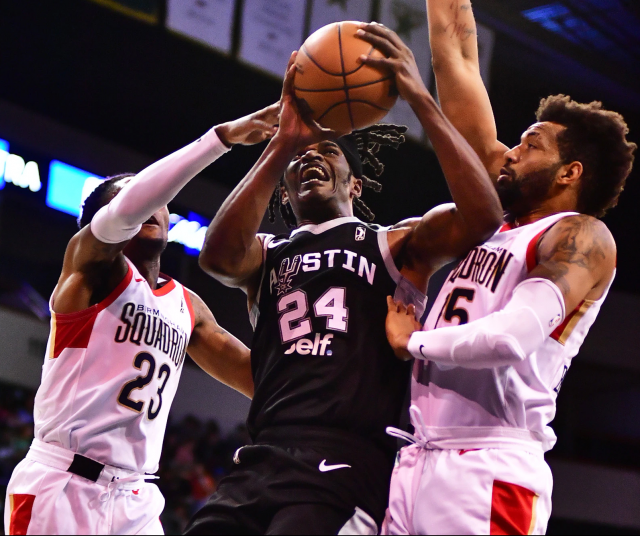 After a resounding 111 – 98 victory over the Birmingham Squadron on Saturday, the Austin Spurs will hope to make it two in a row in the return game on Sunday, November 27th. The Spurs were happy to enact revenge on the team that blew them out earlier this month and hope to get another dub over the New Orleans Pelicans affiliate. Austin’s offense has continued to produce with great efficiency and as the defense improves. This team has a real shot at making waves throughout the course of the Showcase Cup.

With a comeback win on Saturday against the Squadron, Austin looks to make it two in a row and begin to go on a winning run heading into the month of December. The key to the offensive success for the Spurs was the same old story, as Alize Johnson and Chaundee Brown Jr. were the stars of the show with 27 and 23 points respectively. The forwards have been doing the business for Austin so far this season, with Johnson recording his third consecutive double-double. If he can keep performing like this night in and night out, he will be back with a big-league ball club in no time.

Another talking point about the recent game was the improvement on defense. This has been a topic during the early part of the season and, if Austin can continue to fine-tune that area, they can really compete with the best in the league. A big plus for this second game is that it will be nationally televised on NBATV, providing great exposure for both teams. Allowing national tv time for G League teams is a great way of improving development and getting more people involved with the organization.

The Squadron will hope to kill the momentum of Austin and try to bounce back in front of their home fans. Once again it was Kelan Martin who was the top scorer for Birmingham with 23 points. Zylan Cheatham had nine points and eight rebounds and Dereon Seabron contributed 10 points and four assists. It was a lack of offensive production that hurt Birmingham on Saturday afternoon, which has really been a rare occurrence this season.

There will be questions to ask about the defense after giving up 111 points in the loss, so the Squadron will look to rebound big time against Austin. They surely want to prevent the losses from progressing into a big downhill slide.