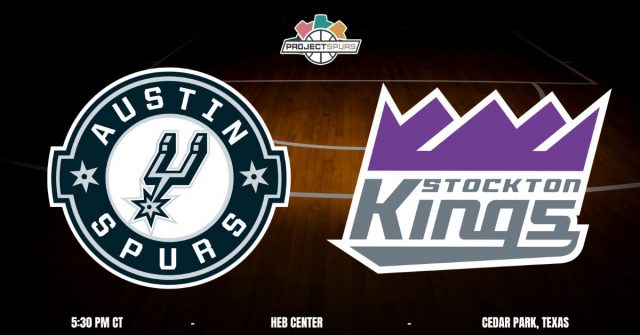 After a tough and disappointing two-game series in which they dropped both games against Mexico City, the Austin Spurs will now look to regroup as they take on the best team in the Western Conference the Stockton Kings. Austin will be happy to return to the H-E-B Center in Cedar Park after a few games on the road. Their reward, however, will be facing a tough team, with the Kings going 7-1 so far during this restart of play. It will be another difficult game to add to the remaining schedule that Austin still has to play. It just shows the amount of talent that is in the G-League this season.  After battling it out with a very solid Mexico City team for two games, that should give the Spurs confidence that they can go toe-to-toe with better teams.

Today, we honor and celebrate the life and legacy of Dr. Martin Luther King Jr. pic.twitter.com/7QA7gpMfvH

Despite the loss against Mexico City on January 14th, the Spurs should take some confidence from this recent road trip knowing that they can compete with quality teams. Undoubtedly Austin’s best performer on the season so far in center Charles Bassey had another stellar night with 26 points and 10 rebounds. Bassey has been up and down between Austin and San Antonio this season, but every time he steps on a G-League court, he balls out tremendously. Alize Johnson also finished the night with another double-double, totaling 14 points and 12 rebounds. It is safe to say that Austin’s frontcourt is producing leaps and bounds on the offensive side of things. The issue now is that they must get more out of the backcourt. Jalen Adaway has been a spark plug off the bench, but with the call-up of Blake Wesley, it has been tough filling that void.

In their last game, and what has been a consistent issue this season, the Spurs have been in close games and then fallen behind by double digits in the 3rd-early 4th quarter marks. A big emphasis has to be keeping the game tight and stiffening up on the defensive grounds.

It is no secret at the Stockton Kings are currently the best team in the entire G-League with a record of 7-1. This will be Austin’s toughest test for the rest of the season, with Stockton red hot and showing no signs of slowing down. In their last game against Rio Grande Valley, the backcourt, which has been the story of the season, took over. Keon Ellis continued his fine form with 22 points, eight rebounds, and five assists. Ellis has been the top performer this season, really showing maturity beyond his years. DJ Steward also had a big night off the bench with 25 points and is a force to be reckoned with as well.