CEDAR PARK – The Austin Spurs announced that they will be hosting their annual San Antonio Spurs Affiliate Night tonight against the Salt Lake City Stars.

With Affiliate Night, fans will be able to enjoy entertainment from the Spurs mascot The Coyote, the Spurs Silver Dancers and Team Energy. Fans will also have the opportunity to take photographs with the 2014 San Antonio Spurs NBA Championship trophy at the arena.

In addition to Affiliate Night, the Austin Spurs will also be hosting Scout Night with local Boy and Girl Scouts.

From the press release:

The same night is Scout Night, at which local Boy and Girl Scouts will participate in a basketball clinic at Premier Athletic Center before coming to the H-E-B Center at Cedar Park to take part in a STEM fair. Organizations such as UT Engineering, iFLY Austin, and the STEM Scout Nova Committee will be at the fair to give presentations and host activities about the STEM industry.

The action begins tonight at 7 p.m. CST from the H-E-B Center at Cedar Park, with the game being broadcast simultaneously on the NBA Development League’s Facebook page.

Stay tuned after the game for a full recap of the Austin Spurs game against the Salt Lake City Stars. 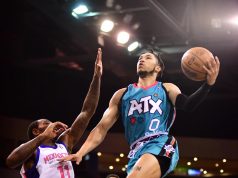