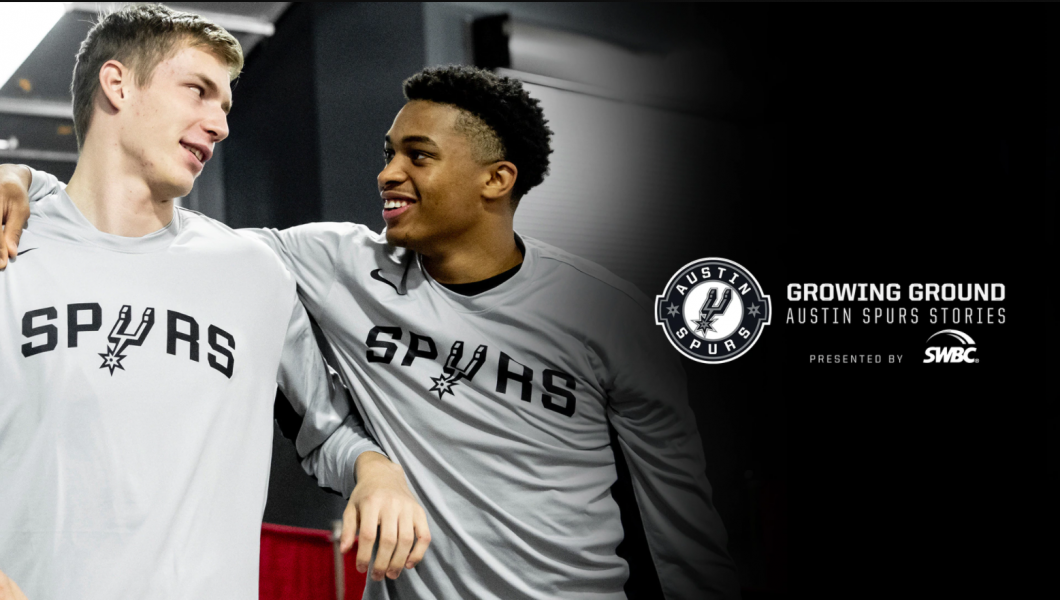 In the absence of actual games, sports franchises around the globe have had to scramble to continue generating content for their faithful during the COVID-19 pandemic. One of the latest pieces from the Spurs is Growing Ground: Austin Spurs Stories, a four-part docu-series focused on the G-League affiliate just up I-35.

With all of the young talent playing in Cedar Park this past year, such a project made perfect sense. With San Antonio’s season likely over whether the NBA resumes play or not, “Growing Ground” could’ve done a lot to build confidence in the process behind the impending youth movement coming to the Alamo City. Unfortunately, it came up short of its potential.

This isn’t going to be an episode-by-episode breakdown, but rather an evaluation of the series overall. If you haven’t seen the videos yet, they’re available on the Spurs’ YouTube channel.

Understanding that the Spurs are an organization that isn’t known for allowing access, why the Spurs would attempt such a project is a little confusing. A Hard Knocks or Last Dance level dive wasn’t the expectation (though we can dream, right?), but “Growing Ground” hardly gave a superficial glimpse that could be expected from MTV Cribs. Knowing this series would present like the public relations piece it is, I still felt mostly robbed of the 40 minutes invested. It wasn’t all bad though, so let’s dive in.

Even though I don’t understand why the organization green-lit this “Growing Ground”, I applaud them for understanding that the concept is the kind of content that fans want – transparency. The Spurs have operated under cloak, dagger, and the “Spurs Way” for the better part of 25 years, but non-contention doesn’t buy the privacy that titles do – especially in 2020.

If the re-tool is a process that the faithful need to trust in, content like this makes it easier to swallow. Up-and-comers Lonnie Walker IV and Keldon Johnson were right on script with the message that the Spurs want fans to believe – a year in Austin is better for the players in the long run. While Twitter might want to rush the rookies to the floor, it speaks volumes to not only hear this from players of their level of potential but with the polygraph-proof conviction they said it. Gotta love that.

“Everybody wants to play in the big leagues, and you see guys your age playing and everything. So you’re going to have your times where you’re like ‘Dang! I should be able to play,’ but you know, this is a different organization, and they’re for the greater good for your longevity, how you’re going to be 5-6 years from now.” – Lonnie Walker IV, “Growing Ground” Episode 1

Speaking of Keldon, I felt we got a real glimpse into his “Austin Spurs Story”. Viewers were practically in the car with him on his way to a game, and he felt very honest in opening up to show us his mindset. We followed him from the NBA Draft, all the way to him talking about the struggle of moving between the G-League and NBA affiliate. So what’s bad? Well, he’s the only one we really got that from.

Jordan Green and Jeff Ledbetter briefly shared their stories, and Quinndary Weatherspoon gave a glimpse at his origin, but there was no sense of access that this genre of content lends itself to. The commute with Drew and the batting cages with Luka were other small glimpses, but not enough. StarCraft may be a thing of the past, but can’t we get some of the guys playing Fortnite or something?

So under the guise of transparency, fans get a bunch of game highlight footage and I tallied 12 minutes of the management staff talking about the elements of the system that we already know about. That’s pretty bad. Let us in!!

For all of the stories and commentary that we didn’t get in “Growing Ground”, part of Chimezie Metu’s interview may have slipped through the cracks during editing. In the third episode, Metu was talking about the grind of playing with Austin and San Antonio when he said:

“You just gotta put your head down and work, really. Obviously you’re going to get frustrated at some points. Sometimes you might feel like you’re not getting what you deserve or what you’re working for, but nobody really cares – You just gotta keep going. Hopefully it’ll pay off.” – Chimezie Metu, “Growing Ground” Episode 3

The second part really stands out, and keywords in bold. “Sometimes you might feel like you’re not getting what you deserve or what you’re working for, but nobody really cares – You just gotta keep going. Hopefully it’ll pay off.” It is one thing to think it, but another to say it. This may be one of the reasons that the Spurs are always so tight-lipped.

With Lonnie, Keldon, and even Luka so sold on the opportunity Austin provides, Chimezie sounds pretty disgruntled here. It only takes one bad apple to ruin a whole basket, and one player who puts himself above the team can have the same effect on the first-round talent relegated to the G-League Spurs. Yeah, that’s ugly.

It wasn’t all pretty, but Growing Ground: Austin Spurs Stories was a step in the right direction for a franchise that may feel too “old-school” at times. From the episodes being so short (9-12 minutes in length), to the lack of “access” footage, I can’t help but wonder if “Growing Ground” was a rushed, incomplete product.

The Austin season ended early due to COVID-19, and the fan feeling toward the Spurs feels uneasy with San Antonio on pause during their worst season since 1996-1997. A piece like “Growing Ground” could do a lot to build confidence in the patient approach the Spurs have taken to rebound from Kawhi Leonard’s departure two years ago.

The Spurs organization is missing a core, a bond, and brotherhood. With so much talented youth in Austin, it is hard not to imagine three or four players joining San Antonio in the coming season. If they have chemistry off the court, it would be a welcome sight, and this was the chance to show it. Whoops.

What did you think about the “Growing Ground” series? Is there something you would have wanted to see? Leave a comment below, or let me know on Twitter, @JarkClonas or through @ProjectSpurs.