When the San Antonio Spurs took the court in the Orlando bubble to officially resume the 2019-2020 season, nine of the 16 active* players will have had roots that go back to the team’s Austin G-League affiliate. It was the moment that fans have been waiting for – a low risk, high reward scenario to let the kids run. Even Coach Popovich is on board, quoted as telling the media, “If we play well enough to get into the playoffs that’ll be great; my goal is development right now.”

The development in Orlando, of course, is largely the second step in the process for the Spurs’ three rookies, but also as a collective culmination of the efforts of the Austin Spurs staff over the past four seasons. What once was an incubation chamber where patience could be had, quickly became a hyperbaric chamber to heal the wounds of a fractured franchise with an influx of fresh oxygen – A new wave of young players that fit the Spurs’ mold. Fast forward to today and we should have a real chance to see if that therapy is working.

In the second episode of the Spurs’ web series Growing Grounds, Austin’s Jordan Green said on helping guys the young stars develop, “It’s like seeing someone become aware of who they are, where they fit into a puzzle. They’re pieces to the greater puzzle that’s happening in San Antonio, and so what we try here, is to create that same culture on the court and off the court.” So, how do the pieces fit for the Austin alumni? Let’s put it together.

Starting With the Edges

From 2016 to 2018, the San Antonio Spurs progressively lost the heart of the puzzle that was the franchise: Tim Duncan’s retirement in 2016, followed by the losses of Tony, Manu and Kawhi in 2018 to free agency, retirement, and trade respectively. LaMarcus, Rudy, DeMar, Patty,  Dejounte, Derrick, Bryn, Davis, and Jakob didn’t immediately seem like-new pieces that could plug carry the team back to title contention, so rather than forcing the pieces to make them the new center to the puzzle, they became the edges – the best place to start any puzzle.

Rather than looking to other teams for new pieces, the Spurs decided to make their own, drafting Lonnie Walker IV and Chimezie Metu, while signing Drew Eubanks in the summer of 2018 to be coached by former Spur, Blake Ahearn. With these selections and the growth of Derrick White during Dejounte’s missed season, the organization continued inward in putting together the puzzle, and while the picture still wasn’t clear, the organization knew they had pieces that they could shape into fitting together.

As you continue to build inward on a puzzle, it is important that these pieces connect, and the Spurs get that. We’ve already seen glimpses of it in the scrimmages, especially in the closing minutes of the scrimmage against the Pacers. In a complete representation of the Spurs’ last two draft classes, it was cool watching Lonnie Walker IV on the court with Quinndary, Keldon, Luka and Chimezie with 5:30 left on the clock and a ten-point Spurs advantage, which the staff allowed them to ebb and flow before settling in a 118-111 San Antonio win. This is the connection of the middle area of the puzzle and now plugging in the center-pieces. It is my opinion that Luka Samanic and Keldon Johnson will pair together in the next two or three seasons to be a really special 3-4 combination. What’s more is that all of the pieces in the puzzle are starting to fit, thanks to their shared connection in Austin.

the capacity to accept or tolerate delay, trouble, or suffering without getting angry or upset. #BLESSED ❤️ 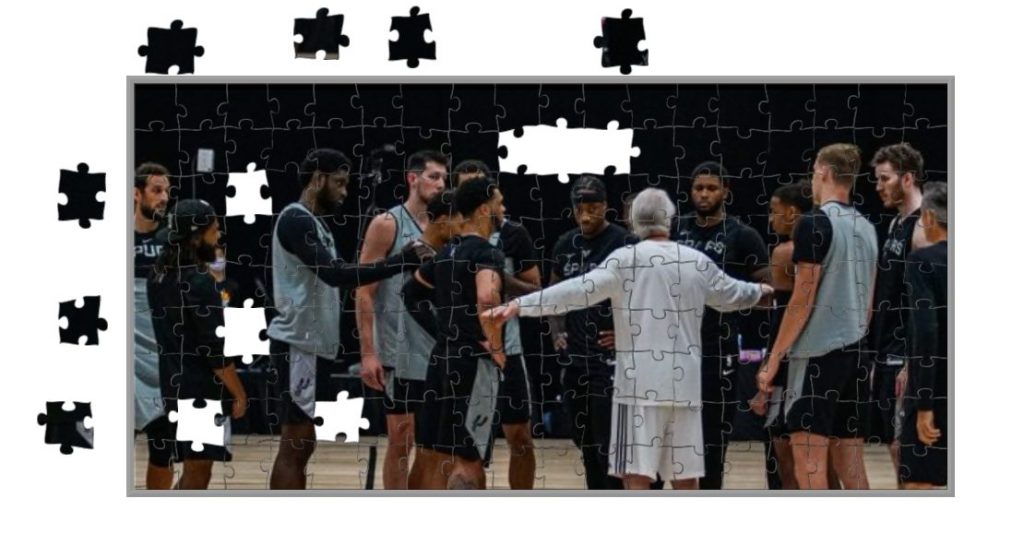 Time for the most satisfying part of any puzzle; smoothing it all out and watching the pieces finally lock into place. With four guards (Dejounte, Derrick, Bryn and Quinndary), two hybrids (Keldon and Lonnie) and a trio of bigs (Luka, Chimezie and Drew), there will be a lot of opportunities to mix-and-match and get three of these guys on the court together at any given team. Given that Austin has been said to use similar terminology and schemes, the importance is less about knowing the communication and more about knowing the tendencies and preferences of the others on the court. The progressive addition of the youth will assist in this. It started with Dejounte and unlocking Derrick last season, then the addition of Lonnie and this year’s inclusion of Keldon. Luka will almost phase in as a 2020 draft pick because he was such a raw product – Look for him to start coming along in 2021.

I’m going to go out on an optimistic limb here and say this franchise is only three years away from serious contention in the West. Other teams will age into their early and mid-thirties, meanwhile, the Spurs should be just hitting stride with the nine Austin alumni, sporting an average roster age of just younger than 26. Can you imagine? That is provided of course that they keep this puzzle together. When I envision this puzzle, I see Derrick, Luka, and Keldon in the center, flanked by Dejounte, Quinndary, and Lonnie, who hold together the border of Bryn, Drew and Chimezie. Like in the era of the Big 3, border and even middle pieces may change, but as long as the center stays together, the picture makes sense.

As when putting together a puzzle, especially the more complex ones, they don’t come together quickly. It takes a little longer when you don’t get all the pieces at once, and have to sift through the pieces to try to find the ones you need. Rather than sifting through, I can appreciate the Spurs’ approach to just make their own pieces in Austin – it takes more time, sure, but you actually spend less time grabbing pieces and seeing if they’ll eventually be a part of the picture. Every organization goes about putting together their team their way, but it is reassuring when one of the center-pieces can buy in.

Stay positive Spurs fans, the puzzle is coming together.

Do you think the Spurs have the right pieces now to guide the team back to contention in the near future? Where do you think the nine players fit into the puzzle moving forward? Let me know @JarkClonas or through @ProjectSpurs on Twitter.

*Bryn Forbes is out for injury, but still on the roster for the Orlando Play-In games.