For days speculation over the destination of Andrei Kirilenko had San Antonio Spurs fans buzzing about the endless possibilities he could bring. A 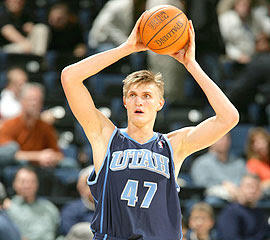 team that was literally seconds away from a championship could bolster their squad by adding the NBA's version of a Swiss-army knife. Kirilenko can guard multiple positions and has the ability to fill in any gaps your team may have. His off the ball game would have fit perfectly for this current Spurs team. Defensively he has the ability to guard multiple positions and make life hard for opposing teams by playing the passing lanes.

The Spurs saw this as an opportunity just like the rest of us. Unlike the rest of us though, they did not want to go all in on this opportunity and risk losing what they have built over the last 2 years. Kirilenko was not a priority. This was a situation that if all the chips fell right, then the Spurs would end up looking like geniuses like they usually do. If he were the main priority then you wouldn't have heard about the Marco Belinelli news or even the Tiago Splitter and Manu Ginobili news.

Based off the sequence of events, the Spurs had the intentions of bringing back the same squad from last year. The only pieces that were expendable were DeJuan Blair and Gary Neal. Still even at this point General Manager R.C. Buford has made it clear that Neal can still remain with the team based on what the market dictates his price to be. In the event that they lost Neal, the Spurs moved quickly to sign Belinelli who some might argue is a taller version of Neal himself.

So where did Kirilenko fit into all of that? The point is he didn't fit into their initial plan. Once Kirilenko opted out of his contract, the possibility arose and the Spurs inquired about his desire to come here. From there signs are that there was mutual interest between the two sides. This gave San Antonio the green light to inquire about a sign and trade with Minnesota. Kirilenko wanted to play on a contender at a reasonable rate ($7-8 million per year) and the Spurs were prepared to offer that to him. With Minnesota's unwillingness to take back any salaries (players), San Antonio lost any traction that they might have had.

The blame game started once Spurs fans got wind of these talks, but in reality the Spurs did the best they could given the situation. In free agency you have to move quickly. The Spurs did exactly that by locking up Splitter and Ginobili. Their salaries are open for debate but they were the main priorities this franchise had going into the offseason. Belinelli and Jeff Pendergraph exhibit the two open holes they had to fill since they were content with letting Blair and Neal walk. Kirilenko was always the cherry on top. He has since agreed to a suspect deal with the Brooklyn Nets and the buzz from Spurs fans has faded. The thought will still linger for some Spurs fans about the possibilities. As always though, once again the Spurs have executed their front office strategy and still look in line to have another successful season.