As Paul Garcia pointed out in the San Antonio Spurs and Denver Nuggets’ series preview on the Spurscast last week, the Spurs are one of the best teams in the league at running halfcourt offense, ranking 4th in the league at 100.0 points per 100 possessions.

If this series becomes a halfcourt battle, it favors the Spurs, and Game 1 showed that. While DeMar DeRozan and LaMarcus Aldridge were bothered by Denver’s defense in Game 1, other Spurs were able to attack Denver, especially Derrick White, Rudy Gay, and Bryn Forbes. And they did it mostly from the mid-range, another topic that Paul and I discussed last week.

The Nuggets did defend Aldridge and DeRozan well, though. Of the 7 shots that Aldridge took near the low post, he only hit 1 of them. Below is Aldridge’s Game 1 shot chart: 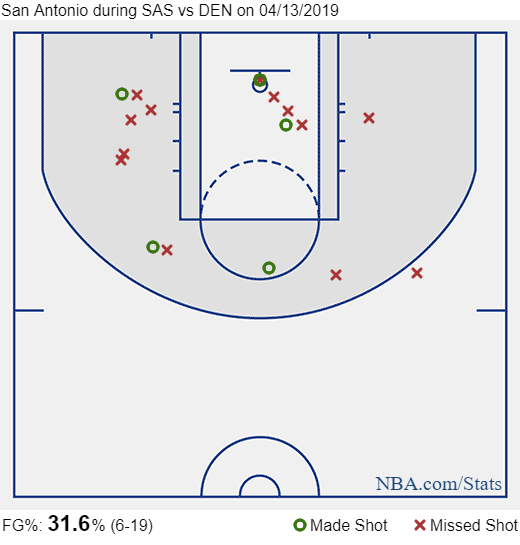 Gary Harris and Torrey Craig defended DeRozan well. While DeRozan was able to contribute in other ways with 12 rebounds and 6 assists, he shot 35.3% in the game.

Jamal Murray did have trouble with White, though. White played an incredibly strong Game 1 and was able to hurt the defense in a variety of ways on Saturday night. The dunk on Paul Millsap was a highlight, but throughout most of the game, especially in the second quarter, White was able to maneuver Denver’s defense easily.

If the Nuggets defense on DeRozan and Aldridge continues to keep them limited, will the Spurs’ other players be able to continue providing the offense? If not, this series could turn. The Nuggets may be taking a different perspective. Is there anything their defense can do to slow down White?

Coach Michael Malone and the Nuggets will probably be tweaking their defense for Game 2. On Tuesday night, we will find out just how effective those changes will be.