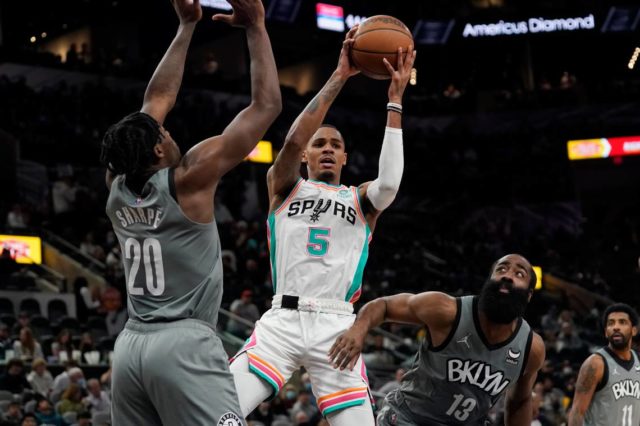 Coming into this piece, I have to admit that it was fairly difficult trying to create a narrative for Dejounte Murray to be the first Spur to make the All-Star game since 2018. Some of you may think that it shouldn’t be that difficult to argue why he deserves an All-Star nod when I could just plug in some stats.

However, that doesn’t do any justice if I swamped you with endless numbers, so here’s why I believe Murray deserves his roses regardless of whether he makes it.

It was Sept.27, when Spurs media day officially kicked off, so of course, it meant fans were going to be spoiled with content that included previews from players and coaches or action-filled photos of the players.

During the media Q&A session, Murray was asked about the trade rumors surrounding him and Ben Simmons this past off-season. His response “I don’t care because I am somebody who understands the business part of this sport. I have zero control over the front office. I just focus on Dejounte Murray.”

The question was brought up due to reports surfacing that Simmons would play under Coach Pop after requesting a trade, and people believed Murray already reached his ceiling. Additionally, people felt the Spurs needed to make a move for another star since they shipped out star-guard Demar DeRozan to the Chicago Bulls, and the question remained on who was going to lead the franchise.

Tracking back to that same September afternoon, Murray posted an Instagram photo posing in his uniform with the caption, “This Is Going To Be The BEST of Them All I Promise!!!”.

Under certain circumstances, it’s typical for an athlete to post a photo of themselves with a motivational caption to get fans excited, but sometimes that excitement disappears when the player doesn’t meet expectations.

However, with Murray, it looks like his promise hasn’t been a lie as he has taken a huge leap this year and despite the team’s poor record, he has given fans excitement on a nightly basis.

So far this season, Murray has averaged career highs in points, assists, rebounds and is the only player in the West to average 19+points while dishing out 9+assists. To put in perspective, the only two other players who are reaching that are guards James Harden and Trae Young, who will likely garner All-Star nods.

Now you may be saying, you said you wouldn’t throw out endless data to illustrate Murray’s stellar season, but just buckle up for a little bit longer.

According to Land of Basketball, Murray’s 11 triple-doubles sit second behind do-it-all Nuggets center Nikola Jokic, who has 12 accounted for this season. Oh, I almost forgot, he just tied former Spur David Robinson’s 14 career triple-doubles, so he seems pretty good.

Lastly, according to NBA.com, Murray leads all guards in rebounds, steals, and ranks fourth in assists. If we pit those numbers against other players who may get chosen over Murray, it’s strange that he is getting overlooked for consideration.

Based on All-Star fan results, Murray didn’t crack the top-10 in voting for guards and some fans saw it disrespectful that they were players who have barely played this season getting more votes than him.

Despite the disrespect, Murray’s breakout season has been appreciated by his teammates and coaches, but also notably by opposing players and coaches around the league.

Here are some comments that have been made about Murray this season:

“The thing I like the most about Dejounte is he’s not just a one-way guy.’’ Suns guard Chris Paul said. “He plays both ways. He’s going to defend, he can score, he can do it all. He’s a leader and he is only going to continue to get better and better.”

“Especially when you’re young, it takes a little time to figure out who you are and what you want to do and the style of play you want to play at,” Clippers head coach Ty Lue said. “He’s figured it out.”

“This guy is a problem. Beach, we got an all-star. And the dribble. If you know, you know that Dejounte is special,” Former NBA player Jamal Crawford said.

“As we’ve said almost all the time, he is having a great season,” Spurs head coach Gregg Popovich said. “He is rebounding. He is assisting. He’s scoring. He’s running the show for us and doing a fine job.”

Those comments only represent a small snippet of the amount of praise that Murray has gotten this season, but the question is if that praise will translate to him being sent to Cleveland.

Based on fan results, it’s likely Murray won’t be penciled in over presumed starting guards from the West, Ja Morant, and Steph Curry. However, he still has a chance to get voted in as a reserve or wild-card player that gets chosen by the coaches.

Just to clarify, I’m not pleading that Murray snags a starting position over those two, but I feel his case is strong enough to be picked as a reserve or wild-card spot. Regardless if he makes the All-Star game or not, Murray’s breakout season should be a silver lining fan take, because once he gets help, scary hours are upon us.

Furthermore, the last remaining thing that I have to say is pleasing someone, anyone, go to your nearest H-E-B and give Murray his damn roses.

Without Murray, the franchise may look like the Orlando Magic or Houston Rockets, although he hasn’t posted MVP numbers that people felt were  needed for fans to shout MVP chants towards him, he sure has been the team’s most valuable player.

Take that for data.