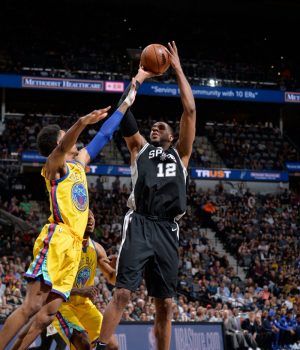 SAN ANTONIO – With the San Antonio Spurs’ double-digit lead gone, LaMarcus Aldridge knew he could not let his team lose at home to the injury-depleted defending champions. So he turned up his game in a big way.

Aldridge scored 19 points in the fourth quarter to lift the Spurs to an 89-75 victory over the Golden State Warriors (53-18) at the AT&T Center on Monday night.

The victory was the fourth straight for San Antonio and the fourth game of a six-game homestand. With the win, the Spurs moved up to fifth place in the Western Conference with the New Orleans Pelicans and Utah Jazz idle.

Golden State was without their All-Stars Stephen Curry, Kevin Durant and Klay Thompson, who all missed the game due to injury. Draymond Green did not return in the second half after suffering an injury to the pelvic area earlier in the game.

Here is what went good and bad for the Spurs, as well as three standout players: Aldridge, Danny Green, and Patty Mills.

LaMarcus Aldridge: Just like he has done all season, LaMarcus Aldridge came up big for the Spurs when he was called upon. His stat line showed it and his actions on both ends of the floor showed just how important he is to this San Antonio squad.

Aldridge finished with 33 points and 12 rebounds, posting his second straight 30-point game and 14th of the season. Warriors coach Steve Kerr told his team to double Aldridge as much as possible. They did. Early and often, but the All-Star forward responded by playing out of the double team, finding his open teammates, and staying aggressive even with two guys defending him.

Danny Green: The Spurs’ recent lineup change saw Pop insert Danny Green back into the starting lineup and it is safe to say that the move has paid off.

Green went 3-for-4 from three-point range and finished with 11 points on the night. On the defensive end, he was aggressive as well as he guarded Shaun Livingston well and back on the offensive side, helped out Aldridge when he was doubled.

Patty Mills: The fan favorite Spurs guard broke out of his shooting slump as he stepped up big in the opening quarter and helped down the stretch to secure the win.

Mills had 12 points on Monday night and shot 50 percent from 3-point range. He would hit back to back three-pointers in the first quarter and put the Silver and Black up eight in the final quarter with one more triple. On the defensive side, he was a pest on Nick Young and rookie Quinn Cook.

The Spurs are now 41-30 on the season and will return to the court on Wednesday when they welcome the Washington Wizards (40-30) to the AT&T Center at 7:30 p.m. CST to continue their homestand.