As the San Antonio Spurs extended their fifteen year NBA playoff appearance streak and yet another 50-win regular season, one should take a look and savior the rare feat the Spurs have been able to accomplish.

Gregg Popovich’s first stint with the Spurs was from 1987 to 1992 as an assistant to Larry Brown.  During this time, they drafted a rookie from the Naval Academy named David Robinson along with a small forward from Arizona named Sean Elliot who would be the core of the team for years to come.

The "Gregg Popovich Era" began with the 1994 as the GM and Vice President of Basketball Operations.  In 1996, he took the helm of a strong Spurs Squad that was comprised of David Robinson, Sean Elliot, and Avery Johnson which laid the foundation. That squad missed the playoffs but the silver lining of lost season (where David Robinson was injured and missed a large chunk of season) was a rookie from Wake Forest and the rest, as they say, is history.

The current “Big 3” of Manu Ginobili, Tim Duncan and Tony Parker, took the teachings and standards that were given to them and made sure their new teammates knew what was expected of them. 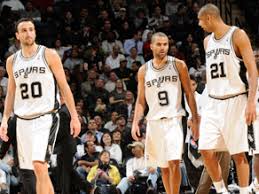 Recently coach Popovich was asked, in an interview by the Dallas Morning News, if back as an a assistant coach on Larry Brown’s staff he foresaw the success back when he took the helm of the Spurs.  His response classic Popovich,

The success enjoyed by the Spurs is equal parts organization and player talent.  By having their superstars give maximum effort during games and practice, along with being open to taking and execution coaching.

A good example is Stephen Jackson. While with the Spurs he is critical role player off the bench who can be dominate a game in spurts.  When he left the Spurs, he was notorious for taking ill advised shots and killing team momentum.

So with the playoff appearance streak extended for another year and the franchise racking up another 50 win, it is time to relish in this franchise's quiet success.