For the first time in 22 seasons, the San Antonio Spurs will miss the NBA playoffs.
I’m not crying…YOU’RE crying!

For over two decades San Antonians have known nothing more than a captivating, consistent, championship-caliber brand of basketball. However with Phoenix, Memphis & Portland all winning their season finales, the San Antonio Spurs will finish just 1.5 wins shy of an NBA record 23rd consecutive NBA playoff appearance. 8,149 days have passed since the Spurs last missed the NBA playoffs. All it took was a global pandemic to end the Spurs streak, and the fact that it ended the very season that it would’ve set an NBA record perfectly encapsulates the year of 2020. Still, before we go blaming the year, or star-signs, or “Mercury being in retrograde” let’s take a minute to appreciate an entire generation of San Antonians growing up to know three constants in life. Death, Taxes, and Spurs Playoff Basketball.

According to the City of San Antonio, approximately 541,000 San Antonians were yet to be born when the historic streak began in 1998. I personally equate Spurs playoff wins with free breakfast tacos & coffee. However, even that local tradition is relatively new. To truly understand the longevity of the spurs’ postseason success lets take a look at how much things have changed both on and off the court.

The playoff streak began in the half-filled yet somehow still deafening Alamodome; adjacent to a downtown San Antonio skyline that looks very different than it did back in 1998. The Spurs home court-advantage over the last 22 seasons cannot be overstated, as the team has now raised five championship banners into the rafters of the now-aging AT&T Center. An estimated 16.6 million fans have attended Spurs home games in that time span, so feel free to consider it a team effort Spurs family. Locally, the metro area population has nearly doubled in size and although you might not find it hard to believe, the construction on Loop 1604 has indeed outlasted the Spurs’ playoff streak! 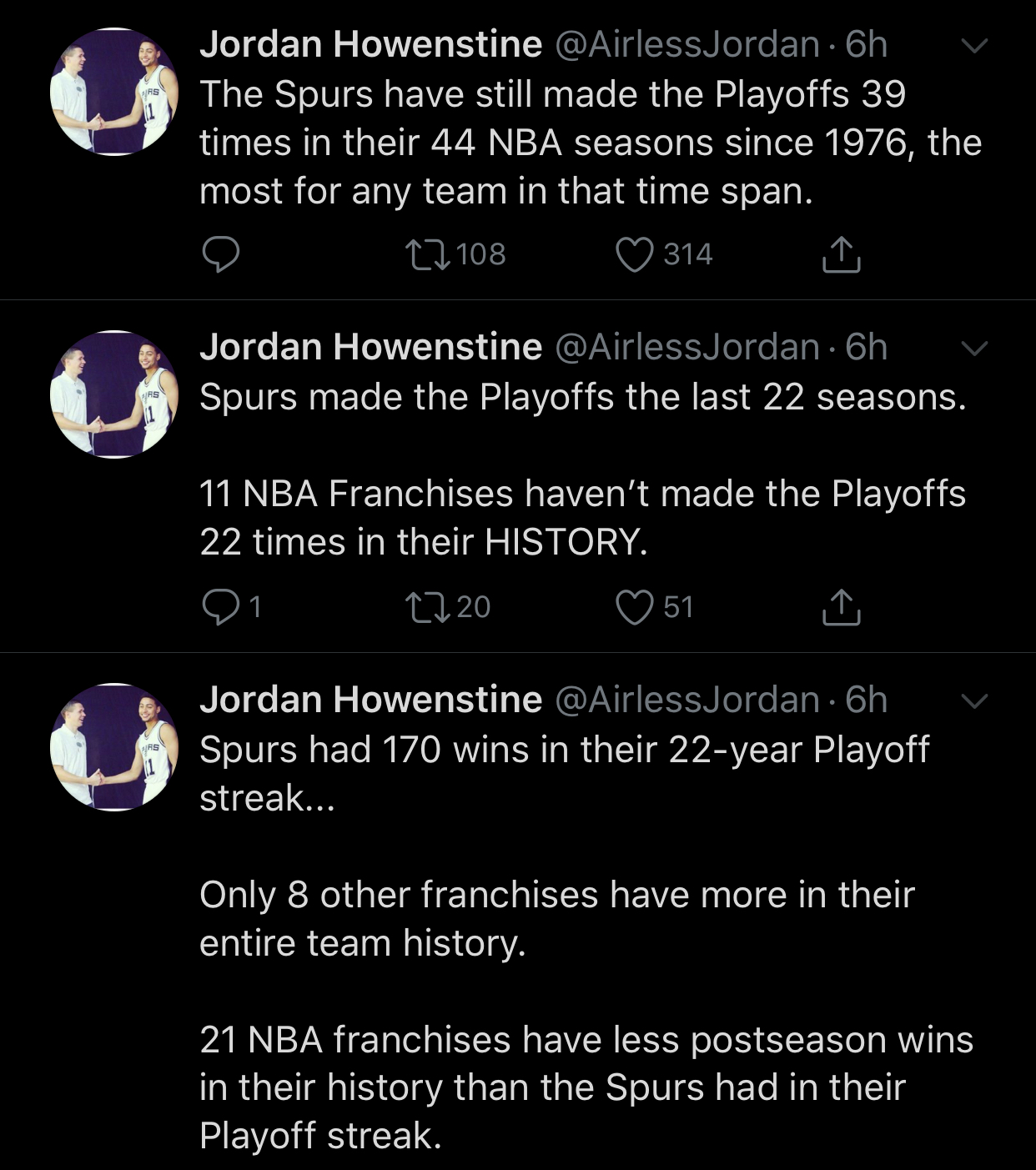 Needless to say, the Spurs STILL stand head and shoulders above the league; and they still will even after taking a post-season off. During this 22 year stretch, San Antonio has quite literally won more playoff games than 21 of the 30 NBA franchises ever have! The Spurs’ five NBA championships total more than 26 teams, with only the Los Angeles Lakers, Boston Celtics, Chicago Bulls & Golden-State Warriors winning more titles. San Antonios’ four championships an eight-year span (1999-2007) firmly cemented the organization as one of the NBA’s few dynasties. The Spurs’ fifth and final championship coming seven years later, a true testament to the teams’ endurance and resolve.

The longevity of this historic streak truly emphasizes the Spurs’ ability to win in many different ways, throughout many different eras of the NBA. From the low post dominance of the “Twin Towers” of Tim Duncan & David Robinson. To “Manu Madness“ and Tony Parkers’ eventual take over of the offense. Ending in an ultimate evolution into “The Beautiful Game” Spurs which hoisted the teams‘ fifth and most well-deserved championship. The organization has somehow adapted over time while still staying true to its’ proven championship pedigree.

The San Antonio Spurs have truly set the gold standard for sustained success in the NBA. And at the finally realized end of an era, the best thing to do is to look back. To try and appreciate something the NBA and San Antonio may never see again! I mean, how often does a Hall of Fame coach, draft three separate Hall of Fame players? How often do a city and a community truly bond with an organization and its’ players? How many times can a team knock on the door of history before finally etching its franchise into the history books? The Spurs have done so, and it has been a true pleasure to watch. Over the past 22 years, we all have taken the Spurs historic run for granted in one form or another. So let’s do our best to appreciate it now!