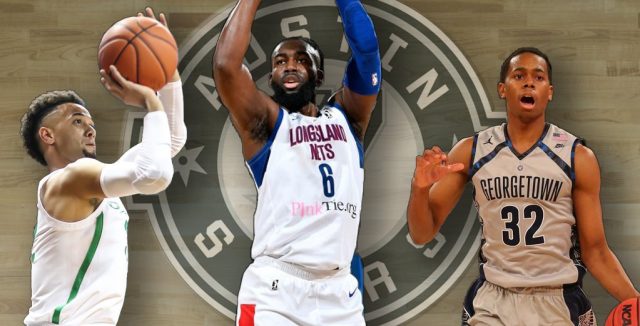 Shortly after it was announced officially that the NBA G League would have a season in the ESPN Wide World Of Sports Complex starting in February, the whirlwind of the NBA G League schedule began.

18 teams will play in the bubble including the new NBA-owned Ignite, which features top players from the high school class of 2020 expected to be first-round draft picks in the NBA’s 2021 draft. Usually, an event that happens in the fall before the G League season starts, the G League Draft took place Monday in an exciting way to invite players into professional basketball.

The Austin Spurs selected three players in the first two rounds of Monday’s G League draft. Here’s what these players did before being drafted by the Austin Spurs:

Although a four-year player at Fairfield University in Fairfield Connecticut and a high school graduate in Westtown School in Pennsylvania, Kasibabu was born in Kisangani in the Democratic Republic of Congo.

Before enrolling at Fairfield in 2015, Kasibabu played 14 games for Real Madrid’s U18 team in scouting tournaments hosted by the Spanish ACB where he earned all-tournament honors for Ciutat De L’Hospitalet in 2014. He was also named an All-Tournament player at the Nike International Junior Tournament. The next year Kasibabu came stateside and played one season at Westtown where he led his team to a 25-8 record earning All-Friends School League First Team.

Kasibabu played at Fairfield from 2015 to 2019 and actually played last season in the G League with Long Island (It is common for free agents to be drafted i.e. when DeJuan Blair was drafted by the Austin Spurs in 2017).

During that time the 6’8” forward has was known as a defensive-minded rebounder. The 2019 Metro Atlantic Athletic Conference defensive player of the year, Kasibabu makes an impact with blocks, steals, offensive rebounds, and a high shooting percentage from the field. Last season in the G League, Kasibabu played 36 games and started 26 for the Brooklyn Nets affiliate team. With Long Island, Kasibabu averaged 20 minutes per game resulting in averages of 7.5 points, 6 rebounds (2.5 of those rebounds being offensive), a field goal percentage of 51.8%, and just under a block per game.

Kasibabu is primarily a screen setter and rim roller that can also be a post up scorer on the block. He doesn’t shoot 3-pointers often but has a solid enough 31% on his limited attempts. Kasibabu has a wide body and solid anticipation around the rim.

A graduate school player for the Oregon Ducks, Mathis returned to his home state of Oregon where he won three-straight 6A high school basketball championships at West Linn High School with current Boston Celtics guard Payton Pritchard. When the duo reunited in 2020 the Ducks secured a PAC-12 Conference regular-season championship and a ranking of 13th in the national standings.

Before playing for Oregon, Mathis had spent four years at New Mexico. He received a medical redshirt year his sophomore year when he had a season-ending injury preserving the year of eligibility for him to transfer to Oregon for grad school. Mathis’s college career took off following that injury his sophomore year when as a junior he broke the Lobos conference 3-pointers made record with 66 and finished 3rd all time in a full season for the Lobos with 98 made 3-pointers. Mathis’ senior season he would break the Lobos overall 3-pointers made in a season with 106. He shot 41% from behind the 3-point line and led New Mexico in scoring with 14.4 points per game, playing a part in earning Mathis third-team all-Mountain West his final season with New Mexico.

In short, Anthony Mathis can shoot. A 43.6% average from deep over a five-year sample size proves he knows how to hit a 3-ball. In his final three NCAA seasons, Mathis went an impressive 273 for 614 (44.4%) from three. In a fast-paced G League, shooting is always valued and Mathis can help space the floor.

The Austin Spurs’ final selection of the 2021 G League draft is actually a repeat of a second round pick Austin made in 2019 in Kaleb Johnson. Johnson is the older brother to current San Antonio Spurs forward, Keldon Johnson. As a high school player, Kaleb Johnson was the 19th ranked small forward nationally and the 5th ranked player from the state of Virginia.

His best season with the Hoyas came when he was a junior and started all 30 games for Georgetown. Kaleb shot 37% from behind the 3-point line over his four-year NCAA career and was a versatile defender who can guard multiple positions. Overall from the field, Johnson had a stellar finish to his college career making 56% of his field-goal attempts and just a shade under 36% from three in his final two seasons with Georgetown.

The NBA G League season is slated to start February 8th in Orlando with players reporting to their markets on January 19th and arriving in the bubble on January 26th.