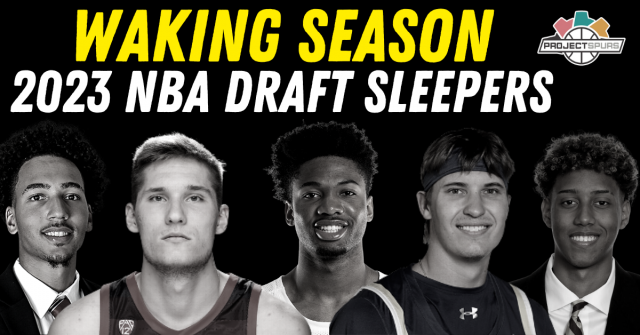 We’ve given you one list of potential NBA Draft sleepers and with the college basketball season just around the corner, it’s time for another one. We’ve got some college players to keep an eye on who you might not have been watching otherwise. Especially since college basketball is starting in just a few short weeks.

The Auburn freshman is likely to shoot up draft boards this season as more people see him play. The 6-foot-10, 225-pound forward is a sound player and has been showing promise as a solid shooter at his size. He played well during Auburn’s overseas trip and has been getting rave reviews since then. He’ll mix it up on the boards and he plays well in the post. If he can move farther out than 12 feet and prove his range is expanding, he is going to be a hot commodity.

The 6-foot-11, 245-pound junior returned to Arizona for another season of skill honing and he is hoping it pays off for the draft. He handles the ball well at his size and can play more on the wing as opposed to being a traditional back-to-the-basket big man. The lefty will have to improve his numbers from beyond the arc (he shot 26.3% last season) and from the free throw line (66.9% last season) if he wants to slide into the first round of the draft.

The 6-foot-7, 205-pound senior is coming back to South Dakota State where he averaged 16.2 points, 1.3 steals, 4.5 assists, and 7.8 rebounds per game. He should be able to join Creighton seamlessly and become a go-to scorer for them. He shot almost 47% from deep and is a crafty scorer off the dribble. He can play multiple positions and should benefit from stiffer competition in the Big East.

This 6-foot-11, 205-pound freshman out of Florida State has some draftniks drooling over his potential. Coach Leonard Hamilton has found himself another diamond in the rough, this time from Spain. Miller grew up playing guard, but shot up about eight inches at one point and now plays more on the wing rather than as a true big man. If he can show consistent improvement on his shot, he will be shooting up draft boards.

The 6-foot-8, 225-pound redshirt junior has improved his game every year at Kansas. He may not have put up more stats last season, but he became considerably more efficient. He shot 46.1% from the floor last season but will have to show improvement on his three-point shot to get serious consideration as a draft pick. He improved his free throw shooting last season, but will likely need to see another bump there as well to become more attractive in the eyes of scouts. He already scores the ball in a variety of other ways and is a good defender, which should help him attract the eyes of scouts.

Who are your 2023 NBA draft sleepers?