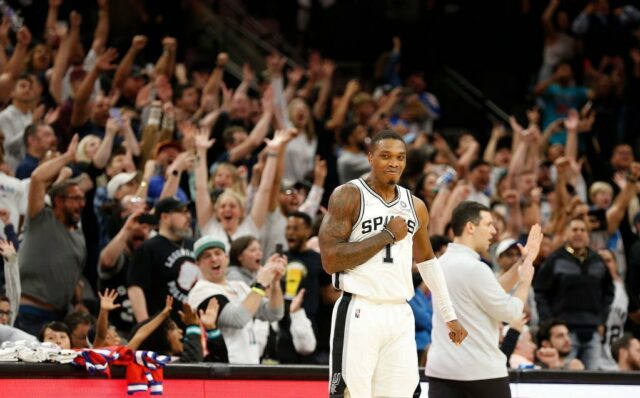 Continuing with the 2022 free agents series, let’s look at one of the San Antonio Spurs’ free agents, Lonnie Walker IV.

As long as Walker IV doesn’t sign an offer sheet, there’s also the possibility of the Spurs, Walker IV, and Team X to come to an agreement on a sign-and-trade agreement. This would only be the case if the Spurs knew Walker IV wanted to leave San Antonio and they had no intention of matching a proposed offer sheet. This would give the Spurs the opportunity to help Walker IV land with his new team while also trying to get back some assets from that team.

If the Spurs were to pull Walker IV’s qualifying offer at the earliest possible date in mid-July (July 13), that could also be a sign that they may be trying to open significant cap space to try to sign a free agent, who may be an unrestricted free agent.

Do the Spurs have interest in bringing Walker IV back?

We should know this answer soon since they’ll have to make the decision on Walker IV’s qualifying offer in the next nine days (June 29).

Even if the Spurs don’t make Walker IV a restricted free agent, they’d still have his $13.3 million cap hold on the books with ability to re-sign him.

As for what a deal for Walker IV could look like, it more-so comes down to which of the few teams with cap space would offer a deal that’s more than the mid-level exception.

According to Pro Fit X, Walker IV is projected to get a deal in the $17.4 million annual salary range. The problem though is only the Spurs, Detroit Pistons, and Indiana Pacers are projected to enter free agency with more than the mid-level exception ($10.3 million).

A few other teams can open more than $10.3 million in cap space, but that would likely require them losing their own key free agents.

So unless a team sends a significant offer sheet (more than $10.3 million) at Walker IV in restricted free agency, the Spurs are in better position to negotiate a deal if they intend to bring Walker IV back. If Walker IV doesn’t like the proposals from the Spurs, there’s always the option he can accept the qualifying offer, play out next season in San Antonio, and then become an unrestricted free agent next summer.

Walker IV’s role last year was to be the primary  scoring option off the bench. He ended last season with 12.1 points, 2.1 free throw attempts, 0.3 offensive rebounds, 2.2 assists, and 1 turnover per game in 23 minutes, playing in 70 games.

Post All-Star break, with Derrick White traded to Boston, Walker IV picked his scoring up to 15.3 points per game. His three point accuracy also improved during this time to 36.7%. 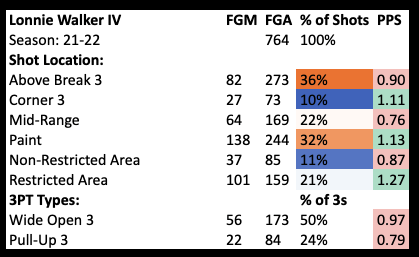 Looking at Walker IV’s shot table for last season, 46% of his attempts came from three, 32% of his shots came from the paint, and 22% of his attempts were from mid-range. Though his 3-point accuracy improved after the All-Star break, he had difficulty for the season making threes from above the break, wide open, and on pull-ups. He was efficient from the corners for the whole season.

When Walker IV did attempt a shot in the paint, he did a good job of getting as close to the rim as possible, rather than settling for floater range shots. On his mid-range looks, he struggled with accuracy on those shots.

Walker IV averaged 5.8 drives per game last season, and when he drove the ball, one of the areas where he stood out compared to teammates was in drawing free throw attempts. On 10% of his drives he got to the free throw line, leading the Spurs in this category among players with over 95 drives.

The Spurs scored 1.7 less points per 100 possessions when Walker IV was on the floor last season per CTG.

If the Spurs were to reach an agreement with Walker IV on returning to the team on a new deal, would they want to see if he can expand his role to potentially being a starter alongside Murray, or would they want to him to keep improving as a scoring punch off the bench?

When looking at other guards and wings in the rotation last season, Walker IV really stood out in defensive field goal percentage and fouls per 36 minutes.

Opponents scored 3.2 more points per 100 possessions when Walker IV was on the floor last season per CTG.