The San Antonio Spurs’ last 10 games sum up where their overall record currently stands. The Spurs went 5-5 in their last 10 games, where one night they lost by 39 on the road and on another night,  they won by 38 at home. Overall through 30 games, the Spurs are an average team, with a 15-15 record.

If you’re new to the 10-game evaluation series, here are Volume’s 1 and 2. Most of the stats used in this evaluation are from CleaningTheGlass.com and on CTG, a ranking is provided for the stats. I created the following rating system based on the rankings:

Now, with 30 games logged, let’s see how the Spurs are playing on both ends of the floor in a bit more detail.

Where do the Spurs frequently take shots from?

Despite playing a dinosaur version of basketball in 2018 with a heavy focus on getting points from the mid-range, the Spurs continue to have an efficient offense built around their mid-3 of DeMar DeRozan, LaMarcus Aldridge, and Rudy Gay. The Spurs saw a +2 points per 100 possessions increase in the halfcourt over the last 10 games, moving them from a good halfcourt offense to elite. The Spurs’ effective field goal percentage had been in the improvement zone, but over the last 10 games, it has moved into the average range. To bring that effective field goal percentage up, the Spurs need to continue their elite shooting from three and the mid-range, and they need to try to make a higher percentage of their shots at the rim.

Since the Spurs are ranked dead last in percentage of shots at the rim, the few they do take and either make or miss has a huge impact on their accuracy ranking from the rim. One player who deserves a shout out over the last 10 games is Aldridge, and specifically finding his mid-range jumper. Over the first 20 games, Aldridge had been on pace for the worst shooting season of his career. He’s back on track now, as he’s still taking 62% of his shots from the mid-range (100th percentile among bigs) and now he’s making 40% of his mid-rangers, placing him above league average among bigs.

Ever since the Spurs signed Aldridge in the summer of 2015, they’ve been a bottom 10 volume three-point shooting team. However, in the past, the Spurs have been a top-10 team in accuracy from three except for last year, when they ranked 26th and made just 35.6% of their threes. So far through 30 games this season, the Spurs continue to be the lowest volume three-point shooting team in the league, but the addition of Marco Belinelli, Bryn Forbes starting, Patty Mills back in his role off the bench, and Davis Bertans and Rudy Gay’s outside shooting, the team is ranked first overall in three point accuracy.

On a recent episode of the Lowe Post, NBA writer Zach Lowe mentioned how the Spurs’ method of playing basketball – high mid-range frequency, but low volume in three pointers, attempts at the rim, and free throws, almost makes it seem like the Spurs are down by 10 in each game this season. While it may not be every game, there’s some truth to that. So far, the Spurs have found themselves down by 10 points in HALF of their games this season. When this happens, the Spurs are 2-13, with their lone comebacks both coming against the Lakers. This is where the Spurs’ dinosaur version of basketball hurts them. When they fall behind, the statistics are showing they just can’t make up the deficit with a low volume offense in 3-point attempts, rim shots, and free throws. Plus, throw in that they don’t get consistent stops on the other end of the floor.

With three high usage players in the starting lineup comprised of DeRozan (32.7% usage), Aldridge (25% usage), and Gay (20.6% usage), the days of the Spurs’ 2014 beautiful game are starting to seem like a distant memory until the bench checks in. The Spurs’ passing stats continue to decline overall, but, as long as the Spurs don’t turn into a high turnover team, the pick-and-roll/isolation/post-up offense they’re running continues to work, as they remain top-10 in offensive efficiency with this new style.

Where do opponents shoot from and how accurate are they against the Spurs’ defense?

Now, if we’re looking at the most recent data, the Spurs are showing dramatic progress. In their last 5 games that have taken place all at home, the Spurs have gone 4-1. Even though they lost to the Bulls Saturday night, that game can be blamed on their offense (scored 93 points) and not their defense (Chicago scored 98 points). In their last five games, the Spurs are ranked 3rd offensively and 8th defensively. During the last five games several players have been on the record of saying the defense is playing “10 times better.” Even Spurs Head Coach Gregg Popovich has said they’re playing better defensively, but he’s looking to see if they’ll stay “consistent,” or if it’ll be “spotty” like it’s been in the past, where the Spurs have strung a few good defensive games together but then lost that focus in other games.

As it has been mentioned before both in this 10-game evaluation series and on the Spurscast, location is key for this Spurs team. At home they’re 11-5 and playing much better defense in the AT&T Center, but, can they take that defense on the road where they have a 4-10 record? That remains to be seen.

Now, to provide a visual glimpse of which specific Spurs players are excelling or not playing well on each end of the floor, you can study the two charts below. Each chart shows the 1st, 15th, and 30th ranked offenses and defenses, where the Spurs are ranked, and where each specific player would rank. 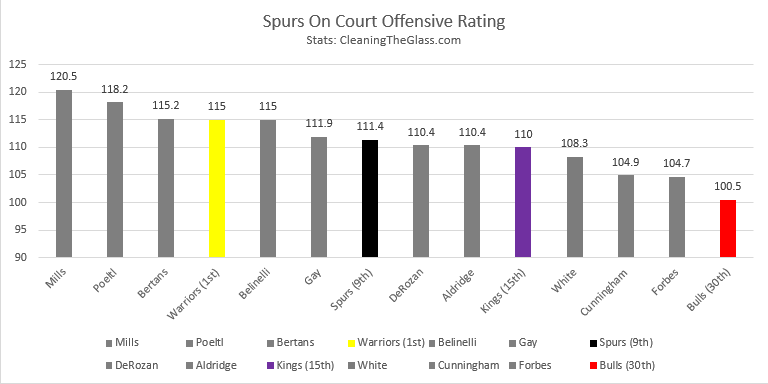 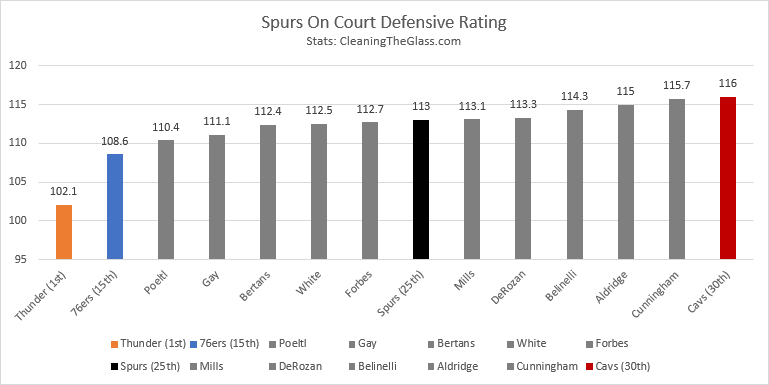 Through 30 games this season, only three players have an on-court offensive AND defensive rating better than the team, and those three players are Gay, Davis Bertans, and Jakob Poeltl. While Gay and Bertans will continue to have consistent roles this season, Poeltl is becoming a force in the frontcourt. In a recent win over the Los Angeles Lakers, Poeltl started and played the entire fourth quarter that turned into a win for the Spurs. Popovich didn’t bring Aldridge into the fourth when it was still a competitive game, and on that night, Popovich went with the Poeltl at the 5, which worked because Poeltl is a low usage, but high efficiency player. Jakob knows his role, which is to set picks and roll, set off ball screens to get shooters open, or crash the offensive glass. When Aldridge is in there and his shot isn’t falling, the opposing defense is able to guard San Antonio’s offense better, since Aldridge needs most times to get the ball in the post, which allows the defense to shrink the floor.

For now, Poeltl being the back-up 5 to Aldridge is fine. However, when Pau Gasol eventually returns (though there’s no set date), the Spurs will have three 5s but not enough minutes. The coaching staff will either have to reduce the role of Poeltl or Gasol, or they could look at playing more traditional basketball with Aldridge at the 4 and Gasol and Poeltl sharing the minutes at the 5. This will be something to watch when Gasol eventually gets closer to returning.

Two more records that sum up a .500 team are listed above.

In their next 10 games, the Spurs will face the 76ers, Magic, Timberwolves, Rockets, Nuggets (twice), Clippers, Celtics, Raptors, and Grizzlies.