After all the speculation and the dust settled, the night ended with Spurs General Manager R.C. Buford saying the team made one of the toughest decisions since he’s been there:

“To move a player like George Hill, who has meant so much to our team, to our culture, to our locker room,” Buford said of Hill who had been traded to Indiana, “was one of the most difficult decisions that we’ve made.”

Yes, after all the rumors were over, the Spurs did trade combo guard George Hill to the Indiana Pacers for the rights to Indiana’s No. 15, and 42 pick, and their No. 46 pick from 2005.

The players the Spurs obtained through the deal were San Diego State’s Kawhi Leonard, Lithuanian forward Davis Bertans, and the rights to Slovenian Erazem Lorbek.

The team also used their No. 29 and 59 picks to select point guard Cory Joseph from Texas and guard Adam Hanga from Hungary.

After the team acquired five new players and lost their sixth man, did they get better or worse? What type of grade would one give Thursday’s draft? I’ve devised some questions to try and give the team a fair grade from all aspects of the draft.

Will these players make an immediate impact?

Yes: Kawhi Leonard is a very athletic small forward who prides himself on defense. He can have an immediate impact as General Manger R.C. Buford hopes to see him in the rotation next season.

“That’s going to be up to Pop and the coaches and how things go in training camp, but he’s a good player. The expectation level is, I hope he would.”

With Hill being dealt to Indiana, the Spurs knew they needed a point guard, and they chose Texas’ Cory Joseph. Now with Hill gone, Joseph may be Tony Parker’s backup. The Spurs saw something in Joseph that most of us did not, it’s why Buford said they wanted him from the beginning,

“We knew we had the 29th pick and the guy we were focused on was Cory and to have that play out is exciting for us.”

The last player who could have an impact is Erazem Larbek. He’s spent the last two seasons playing in the Spanish League with FC Barcelona. Buford described the strides and accomplishments Larbek has made overseas and hopes to see him in a Spurs uniform.

“He’s a very-very effective player and one that we have hope for getting into San Antonio at some point in the future.”

Even if Larbek can’t make the rotation with the Spurs, he’d be a great piece to send to the Austin Toros to work on the terminology and routine of the Spurs’ system.

What do these players bring to the future of the organization?

They bring something this aging Spurs roster is lacking, youth.

Leonard and Joseph are both only 19-years old. Davis Bertans is only 18-years old. Adam Hanga is also very young. With two potential young players in the rotation next season, the Spurs will be able to allow the young players to grow with leadership from veterans like Tim Duncan and Manu Ginobili. Then, when Duncan and Ginobili are both gone, the two players will have the maturity and concept of what it means to be a Spur ingrained in them and ready to carry into the future.

Bertans and Hanga are two pieces that the Spurs intend to draft-and-stash.

“I would envision that to be the case, I don’t know whether it’s one year? Whether it’s two years? I can’t tell you,” said Buford. 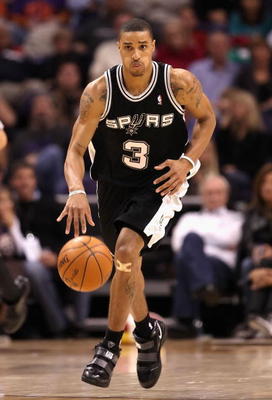 Bertans has a very high ceiling and Buford said he would argue that Bertans was the best shooter in the draft. Others see Bertans potential very high when he polishes his game over seas and eventually makes his way across the pond.

Was there a benefit to losing George Hill?

Yes, by trading Hill, the Spurs were able to make their roster younger, more defensive minded, athletic, and the move helped to build for the future all in one deal. Not to mention help financially for their cap-structure if Hill wanted to sign a long-term deal.

How does losing Hill hurt the team?

Losing Hill means the team has lost its sixth man off of the bench, and they have lost their best perimeter defender. Hill was relied upon to come in and score points off of the bench.

Now who does that? Who is the teams go-to sixth man?

Could it be Gary Neal, James Anderson, Da’Sean Butler, or even the newly acquired Leonard?

Remember in late December when Hill had a highlight-game by stepping up to Kobe Bryant’s face and did not shy away from Bryant? Well, who is that physical, quick, defensive guard on the perimeter that will be able to defend and not back down from the better point and shooting guards in the league? Parker and Neal seem too small. This would me the freshman Joseph would have to become the go to guard defender.

Did the trade and draft fill a need?

Yes, the moves created size and athleticism on the wing, two things the Spurs were lacking. They got two defensive-minded players on the perimeter as well.

Project Spurs Co-Founder Jeff Garcia spoke with Leonard after the draft and Leonard told him of his defensive pride.

“I take pride in defense, myself, I like my men to score the ball. I’m just going to go in, do the same thing I did in college, get some rebounds and help my teammates find ways to win games.”

Buford also reiterated the team liked Joseph because of his defense.

Did the trade and draft open a new hole?

Possibly: With Hill now gone, the Spurs don’t have an established sixth man and if Joseph doesn’t work out as a rookie, then the Spurs will be missing a back up point guard as well. Neal plays the role of a shooting guard and if Ginobili has to play the back up point, he’ll put even more mileage on his already aging body.

After analyzing all aspects of the trade and draft, I’m going to say the Spurs deserve a B for their draft report card. They did partially add what they needed in terms of youth, athleticism, defense and the future. At the same time, by trading Hill they may have opened new holes by potentially not having an established sixth man or legitimate backup point guard.

It wasn’t easy having to trade George Hill, as Buford said Thursday night.

With the team moving forward into next season, into the future, Buford made sure Hill knew he was always appreciated in San Antonio,

“The thing we made George aware of, he’s always a Spur.”